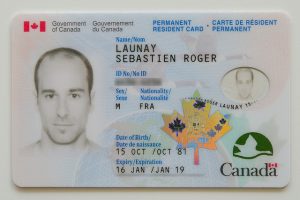 Permanent Residency is an immigration status in Canada that entitles the holder to live and work in Canada for as long as they care to maintain their residency.

Getting a Permanent Resident Card can involve a bit of effort, but with some assistance the process becomes largely painless.

There are only a few ways to have this status revoked, such as criminality or lengthy absence from Canada. Otherwise, there is no limit to how long an immigrant can stay in Canada if they have a Permanent Resident Card.

Along with receiving the actual document, the PR Card, it will also be accompanied by the Permanent Resident Card number. This number is a serialized identifier, which means that your personal, biographic information is linked to this number.

This system is quite similar to other government identification numbers, like driver’s license numbers, or social insurance numbers.

Really, the number is not as important as the actual card itself, but you will still need the number to be included on some applications that you may come across (for instance, driver’s licenses or employment insurance).

The card is particularly important if you wish to travel abroad, because Canada’s immigration officials will want to look at it when you re-enter the country. Obtaining a travel document will achieve the same thing essentially, but Canada prefers the PR Card.

In effect, the number on the card retains very little information. Some countries issue identification numbers which indicate locations, ages or particular statuses (called meta-data), but the Canada PR Card’s primary purpose is to link your name and information to the card itself. If the Canadian PR Card contains any meta-data it is not immediately apparent what it is.

How to Apply for Your First Permanent Resident Card

What You Should Know After Entering Canada as a Permanent Resident ?