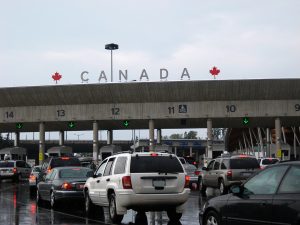 This past July and August, unprecedented numbers of asylum seekers have been crossing from the United States into Canada, without attempting to go through typical asylum channels. The numbers are high enough that Montreal’s Olympic Stadium has been opened to offer temporary housing to those entering the country in this way.

Many asylum seekers who cross into Canada from the United States are detained and then begin the asylum process. In large part, the asylum seekers appear to be from Haiti and are moving north amid fears that US President Donald Trump will end the protections offered to Haiti nationals and will compel them to move back to Haiti. Canada’s asylum process is different than that of the United States, however, and protected status for Haitian nationals has already ended in Canada. It is not clear at this time how many of those seeking to stay in Canada will be allowed to do so.

In the meantime, there is concern about the pressures the added applicants will place on the system. It is unknown where many will be settled and how long asylum applications will be delayed, if at all, due to the influx.

Part of the move towards the north seems to stem from incorrect rumors alleging that Canada welcomes temporary protected status (TPS) holders automatically. In fact, asylum seekers are first screened and if approved must attend an Immigration and Refugee Board hearing date.  If accessing Canada at a port of entry, they must also submit additional application documents within 15 days. Further complicating the issue is the fact that the 2004 Safe Third Country agreement may make asylum seekers ineligible if they enter Canada from the United States.

Ahmed Hussen, Minister of Immigration, Refugees and Citizenship, has publicly stated that the system is working but has stated that the practice of crossing the border illegally is unsafe and has asked asylum seekers to apply for asylum in Canada through official channels from the country where they are located. There has so far been no report of any additional enforcement action planned to try to reduce the flow of people into Canada. The Canada Border Services Agency has stated they are placing additional staff on the border to deal with the added demand.

So far, the number of asylum seekers is the highest in nine years, with about 6,500 seeking the status in the province of Quebec alone between January and June 2017.