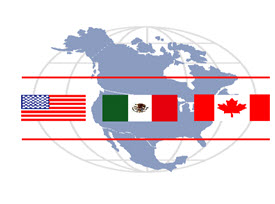 Canada’s government is hoping that its new “Can+” immigration program will make it easier to say ‘hola’ to a growing number of visitors from Mexico.

Under the newly introduced Can+ program, Mexican nationals who’ve visited either Canada or the United States within the last 10 years will be eligible for expedited visa processing.

In addition to making it easier for Mexicans to visit Canada, Citizenship & Immigration Canada (CIC) says the new program will also free up Canadian immigration officials to work on other cases, as well as improving visa processing times. The Canadian government is pledging that under the new Can+ program, Mexican visitors can expect to have their visa requests processed in ten days or less.

The ties between Canada and Mexico are strong, and apparently growing; more than 34,000 visitor visas, study and work permits were issued to Mexican nationals between January and April of this year, a 20 percent jump over the same period in 2013. Conversely, more than 2 million Canadians travel south to Mexico each year.

Still, the Canadian government is predicting that if the Can+ program turns out to be as successful as hoped, the number of Mexican visitors to Canada may increase by a whopping 50 percent.

At least part of the government’s optimistic predictions about the Can+ program are based on a six-month test pilot of the program that produced highly positive results. According to CIC, during the Can+ test pilot, Mexican visas were issued in seven days—or less—and the program received a 95 percent approval rating from participants.

In addition to the Can+ program, and to further help accommodate the considerable Mexican interest in visiting Canada, CIC offers three other “express” visa programs for Mexican nationals, including: