Young Irish and Canadian people can travel to each other’s countries in much greater numbers in the years to come because of Minister Jason Kenney’s expansion of the International Experience Canada program. Once in Canada, immigrants may consider applying for permanent resident status in order to live and work in Canada. 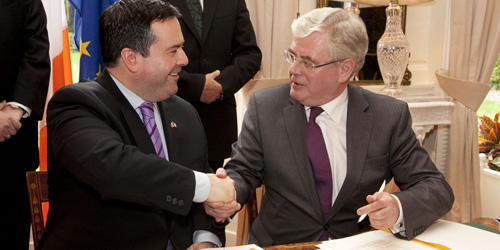 In line with Minister Kenney’s previous policy decisions he is “Focused on creating a proactive, nimble immigration system.” This of course means that things change rather quickly and it’s important to keep up on all of the most recent news having to do with Citizenship and Immigration Canada.

What Minister Kenney wants to do is encourage young Irish people to participate in the working holiday program in coming years, accepting up to 10,000 applicants in the year 2014 if things go as planned. Changes will also be made to the working holiday program itself. Previously participants in the country could get two years in Canada under this program, but they would have to separate the trips, they would have to go home to apply for their second trip. Minister Kenney will allow workers to stay here for up to two years without having to go back to Ireland to re-apply.

Critics of the CIC have said that Minister Kenney’s policy changes are arbitrary, but it is true that one does not need to have months or years of deliberation to reach a decision. In fact, that is the motivation behind Minister Kenney’s policy changes. His desire is to make the immigration system flexible so that it can adapt to the ever changing conditions of the world market. In many ways this is exactly the same tack that a company handles the changes in a capitalist market.

Immigration Direct is your source for updates on Canadian immigration and can also help you apply for immigration benefits to one of the most desired travel destinations in the world, Canada.